Discord Server 11/07/2020
N12Turbo.com now has a Discord server! Let's keep the community alive. We hope to see you there.
Join here: https://discord.gg/3MDhUZb

How to correctly install a timing belt

How to correctly install a timing belt

OK First things first Changing your timing belt is one of the most important yet Dangerous tasks you can do on a built motor, ONLY do it if you can read this thread properly or have a helping hand.

)
8: A helping hand (will Explain later)


1: Getting a Timing Belt.
You Can Get timing Belts from a lot of locations surprisingly for the E15et and the E15e as well as the e15,
Below is a few locations that i have found are well i have also rang and found the best prices for a few locations for australia wide....

2: Removing the old Timing belt.
OK First things first i always disconnect my battery terminals when working under the hood of any vehicle especially when doing the timing belts as we will be working rather close the the Alternator,
After disconnecting the battery you will need to loosen the alternator and (if you have air con) the tensioner located at the bottom of the motor, most alternator bolts on the E15 i have come across have been 12mm, this is located at the top of the alternator from the drivers side turn it towards the front of the car(you do not need to remove the bolt the whole way out as we will be removing the plate that holds it in place further down the track, now with the air con tensioner you will need a 10 mill socket and to lay under the car you will see a small pulley undo the bolt( some may need a little encouragement with the perswation bar) then pull the belts off aircon first then the altinatr and the water pump last then we move onto the harmonic balancer located at the bottom of the engine drivers side 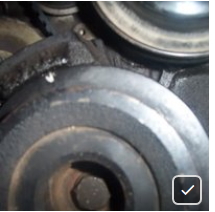 this can vary from car to car as some cars have the power steering one and others don't, this can be done by a 21mm socket with a small extension and from the top of the motor or side your choice, this is were the helping hand comes into the picture as they will need to hold a screw driver on the tooth of the fly wheel under the starter motor (the start motor is located on the rite hand side of the motor on the gear box it has two 14mm bolts holding it in) our motors spin forwards to ward the front of the car so we don't have to worry about a revers thread on the bolt so pulling up on the ratchet will loosen the bolt in theory (if it is being a bugger just get some wd40 and spray the head of the bolt), keep this proses going until you are holding the bolt in your hot little hands.
Now that the harmonic balancer is off you will need to take the water pump Pulley off this is held on by 4 10mm bolts, some prefer to do this with the belt on as it free spins or if you like me and love using anything to vent anger i just get my hand in there and undo the bolts, now this is were the beer comes in handy its good to have breaks while working on these little terrors to fix up cuts or lost fingers

, one we are well watered we can start on the timing cover, now this can vary from car to car, most cars have a 12 point screw others have just 10mm bolts or like myne i have no cover.
There is a small block that helps hold the bracket on for the alternator just in line with the alternator this is held on with 3 12mm bolts, undo them, now the block wont come out as the cover holds in in place then are 5 screws/bolts holding the cover inplace two at the top and one in the middle of the cover (This is best removed with a ratchet as it is a 10mm bolt and is very difficult to get to) just above the water pump as well as on on the rite and left hand side around the middle of the cover from the top as well as two at the bottom of the cover.
One removed you will see you cam timing pully. 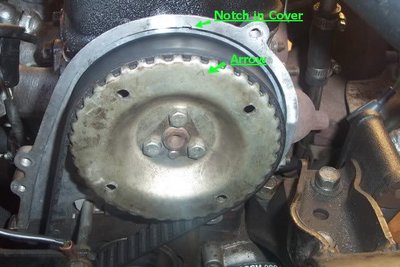 Now this is important if you car has no issues with timing you can leave it as is if your doing a rebuild or want to do this set a base timing you can its up to you i will explain both ways either way.


3: Keeping Timing as is.
To leave your timing in place you will need a perminent marker of white out, there is a small notch that indicates the top dead center mark of the head (top dead center for the head means that the valves will be lined up for number one cylinder to be at the top of the bore) 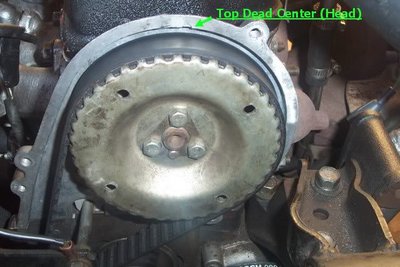 Well were that mark is put a small line on the timing pulley making shore that it is directly in line with the mark on the cover on the head
then move to the bottom and do the same the bottom has a smaller mark on the block and a small indent on the crank sprocket.
Now i dont have an image of that but i have managed to get one from my book. 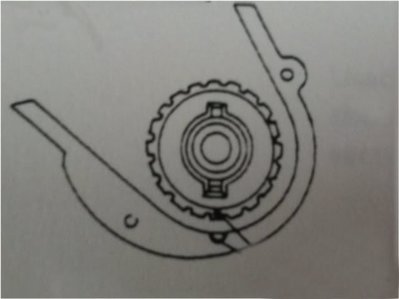 now do the same with this using your texter mark the sprocket inline with the small indent on the block.

you are now ready to Pull the belt off, as it is going in the bin you can just use a screw driver and pray it off from the top pully.

4: Using Standard Marks
Now i prefer to do the timing this way just for peace of mind,
Becuse we are doing it this way we can just pull the cam belt of first, you will need to losten the tensioner that helps keep the belt tight this is located half way down from the top and will need a 12mm spanner
Note: you do not need to losten the bolt all of the way of as it only needs to loosen enuff to alow the pully to come free,
ones the belt is off you prosed with setting the timing up with the marks the head timing (or cam pully is known as) needs to line the arrow up the the small notch in the cover on the head 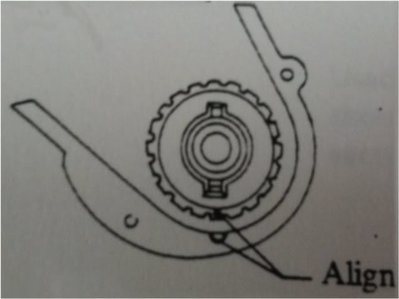 once this is done you can put you belt back on making shore that the marks dont move, then do your tensioner up this does not need to be that tight that it breaks the belt just well tensioned to 21nm, or 2.1 kg-m by the book


Now to put it back together just reverse what is above making shore to keep the marks inline with that you drew or the standered marks (witch eva way you did it) when putting the harmonic balancer back be sore to line it up with 0 on the cover as there is a small outdent in it that can round off over time and can really though out your electroninc timing (as i found out the hard way) when you do that next.
Now before cranking the motor over just doable check the marks and that all is aligned. then turn it two cranks and off listining for any unsual noises if you hear none you have done well,
Upon your test drive dont drive like a mad man/woman as you arnt going to gain any power from this so there is no need to go like a bat outa hell just move up the revs smoothly listing like a cop trying to get his quota for any nocks or noises. injoy and go home and finish your beers and sit and just stare